“But what if it is … only that you are trying to use words that people would actually use? That are the only words that can make the story come true and that you must use them? You have to use them.”
–Ernest Hemingway,  A Moveable Feast.

In a cramped studio w e rented when we first stayed in Paris a few months, a well-worn copy of A Moveable Feast lay on top of three or four books on a night table. The intriguing title was familiar, the first few pages beguiling. The book  begged to be read. And reading about Paris in Paris? Who could resist? 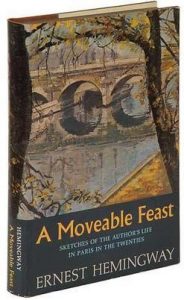 Essentially a memoire of Hemingway’s years as a young man searching for himself, A Moveable Feast couldn’t exist without Paris.  From the first chapter, you sense that Paris is the feast for the eyes, ears, palate, and spirit the young writer needed to nurture his creative passion. He communed with other American writers living in 1920s Paris and eventually found his voice.

The preceding quote sums up Hemingway’s belief that  writers must write the “true” and necessary sentence. It disturbed him to hear F Scott Fitzgerald confess to revising stories in order to sell them. If Hemingway had a crystal ball, he would have realized Fitzgerald’s way was prophetic. Nowadays, most writers write to sell.

Written like a stream of consciousness novel, this book has clause upon clause strung up into one long sentence sometimes constituting one big paragraph. Those long, spare, and true sentences become Hemingway’s trademark, manifested in his ensuing œuvre.

By the early 1900’s Paris had cemented its reputation as a fertile haven for creativity. A reputation that started when mid-1800’s artists who broke away from classicism to usher in modern art came to innovate  and commiserate together in Paris, often in cafés they helped make famous.

Fitzgerald and Hemingway were among the writers who flocked to Paris. They  met shortly after Fitzgerald published The Great Gatsby to critical acclaim. This association with Fitzgerald convinced the younger Hemingway to embark on his first novel (The Sun Also  Rises).

In addition to F Scott Fitzgerald, Hemingway rubbed elbows with Ezra Pound, Ford Maddox Ford and Gertrude Stein  (in Stein’s salon). He formed deep, personal impressions of these writers and got glimpses of Picasso, and other writers including James Joyce and TS Eliot who also came to visit Stein.

In the last chapter, Hemingway makes it clear it’s those Paris years he’d taken with him anywhere he went:

If you are lucky enough to have lived in Paris as a young man, then wherever you go for the rest of your life it stays with you, for Paris is a moveable feast. 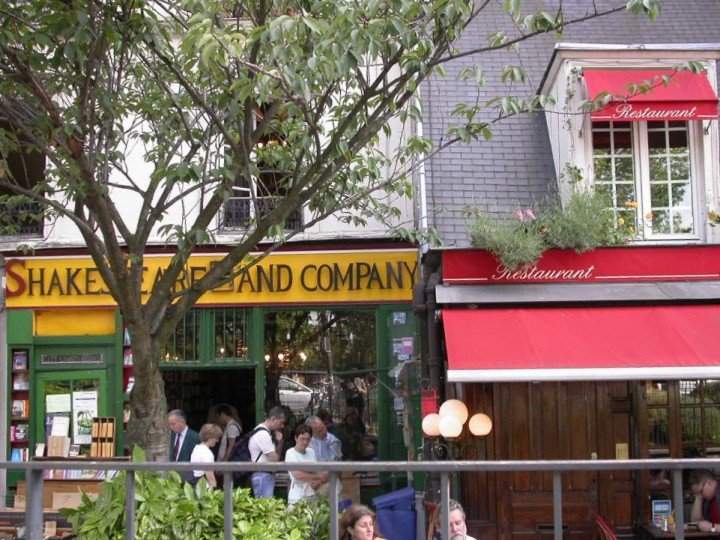 As a piece on writing, A Moveable Feast dispenses valuable insight. You get a good look into what can make a great writer and you learn something how-to books can never teach.

As a memoire of Hemingway’s early life, it’s of dubious reliability. Hemingway suggests in his Preface that the book can be read as fiction. The book does blur the distinction between reality and fiction.

Written more than thirty years after the Paris years, Hemingway’s perceptions are filtered through inevitably-flawed memories, and further biased by current wishes and emotion. For instance, Hemingway seemed much in love with his first wife. In fact, only five years into their marriage and with a young son, he concluded his Paris years with an affair with the woman who became the second of his four wives.

Before I realized the book was set in the twenties but written in the fifties, I thought Hemingway quite perceptive and wise for a young man approaching his mid-twenties. His account actually draws from the hindsight and wisdom of a man in his fifties.

I read two more of those night-table books and have totally forgotten what they were about. But A Moveable Feast etched itself in my memory. The advent of ebooks gave it new life  and now I have a digital copy.

Two versions of the book exist. In 2009, about fifty years after Hemingway’s death, one of his grandsons published a “Restored Version.” It claims to include more material. This second version has had a mixed reception. Some critics believe it’s superfluous: It doesn’t improve on the version published in 1964. It does raise the issue of when a book (or other works of art) is truly finished. This is a conundrum for some writers and artists. I, for one, can always find something to change in my “finished” works.

I believe the relative value of the two versions is a tangential issue and have chosen the first to review. The core of the book doesn’t change, in any case.