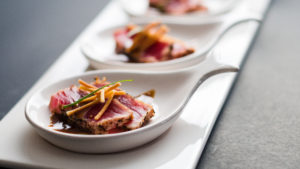 In the film Babette’s Feast, a highly-gifted chef schooled in cooking as high art escapes war-torn Paris. She finds herself living in gentle servitude to two good and pious  but dour, nearly  joyless, sisters.

With no inkling who Babette is, the sisters instruct her on preparing their diet of long-simmered dried fish.  Definitely not cooking as high art and probably offensive to the talented chef.  Babette says nothing and does not show off what she knows.  Until she wins money in a lottery.

She doesn’t take the money to live a little more luxuriously elsewhere. Instead, she spends it on the makings of a feast that she prepares with much care.  The feast is an unexpected gift to the people of this cold and gray seaside village. It’s nothing like they had ever known and something they’ll never forget.

I have watched this film a few times, mostly for its memorable dinner scene. The expressions and comments of diners show them clearly savoring the dishes, allowing tastes to linger sensuously on their taste buds.  No one rushes to gobble up dishes. Instead, diners pause and pay attention. The dishes fill them with wonderment. But the sumptuous dinner does much more than  celebrate food’s appeal to the senses. Depending on their orientation, readers/writers have  interpreted  Babette’s Feast in religious, artistic, or psychological terms (for example, this article by Priscilla Ferguson).

At infrequent dinners we’ve had at chef James Syhabout’s restaurant, Commis, in Oakland, I find myself replaying the dinner scene in Babette’s Feast.  Only, my version of it is more intense and full of happy surprises:  James’s Feast is, after all, real and not vicarious. 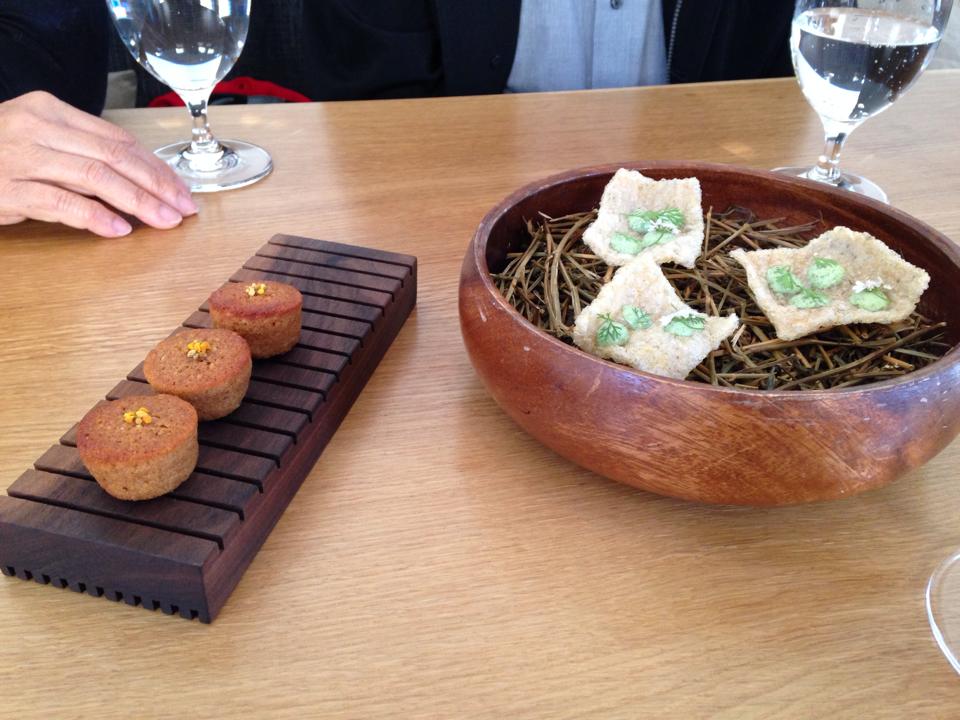 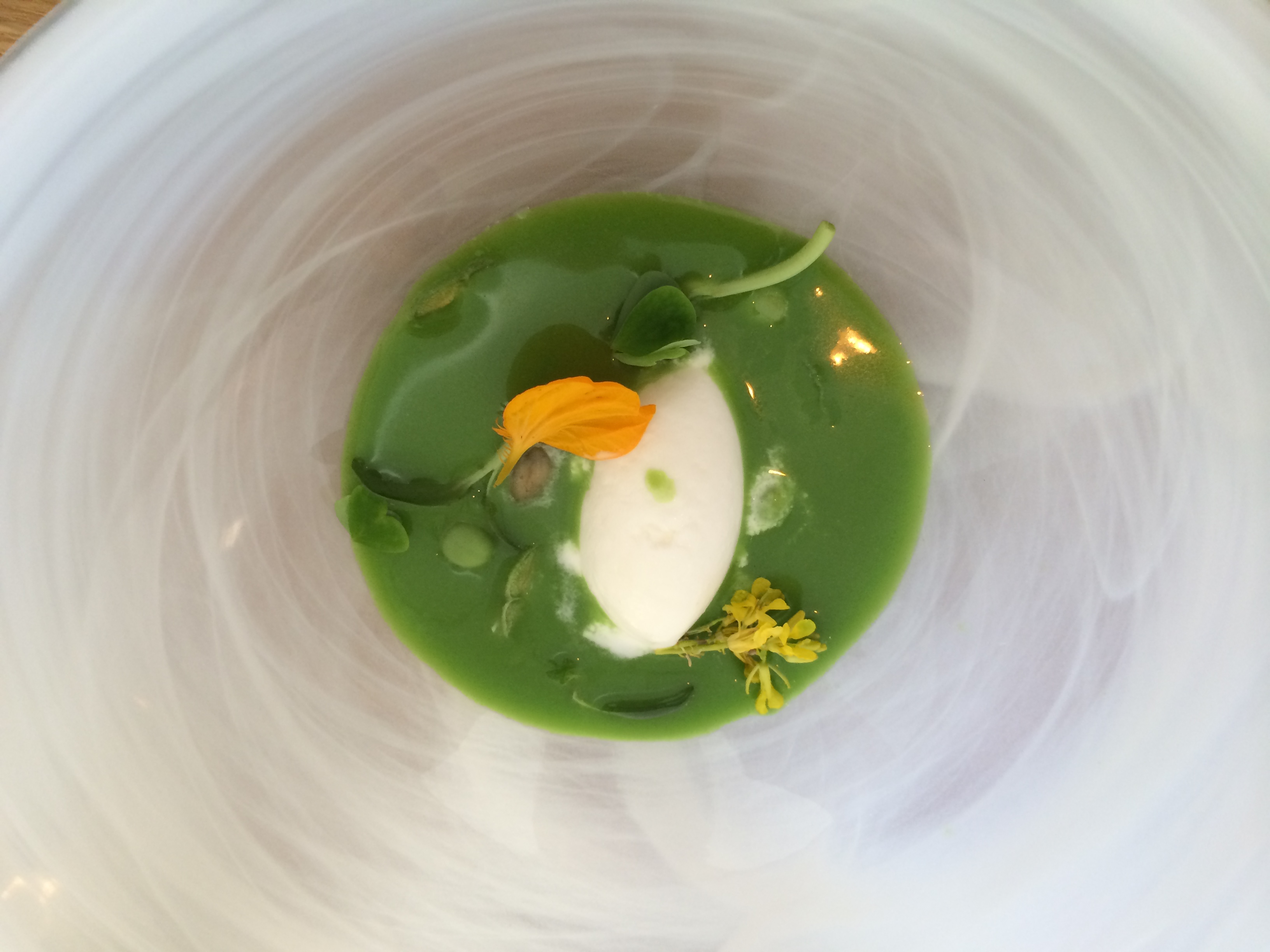 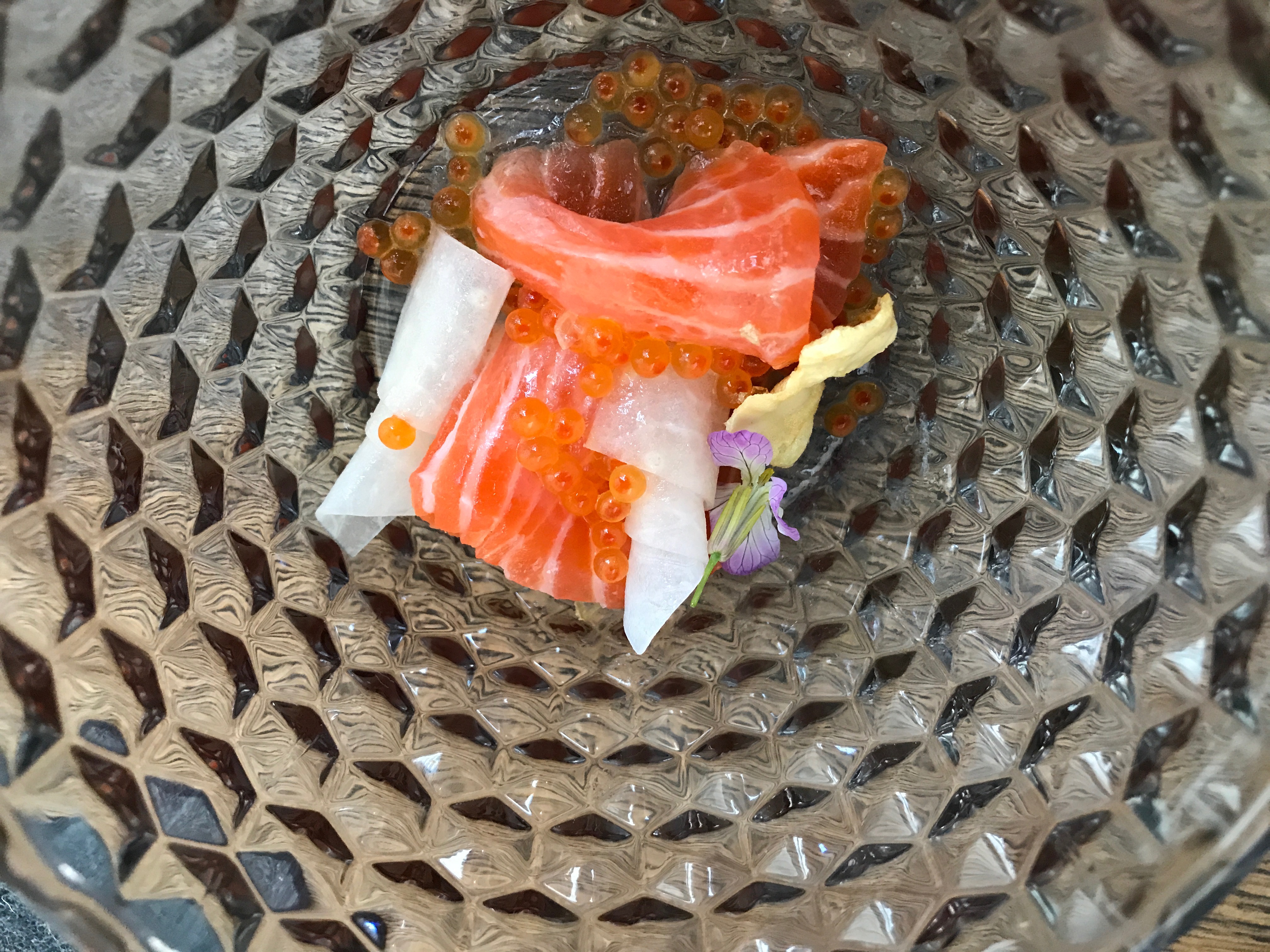 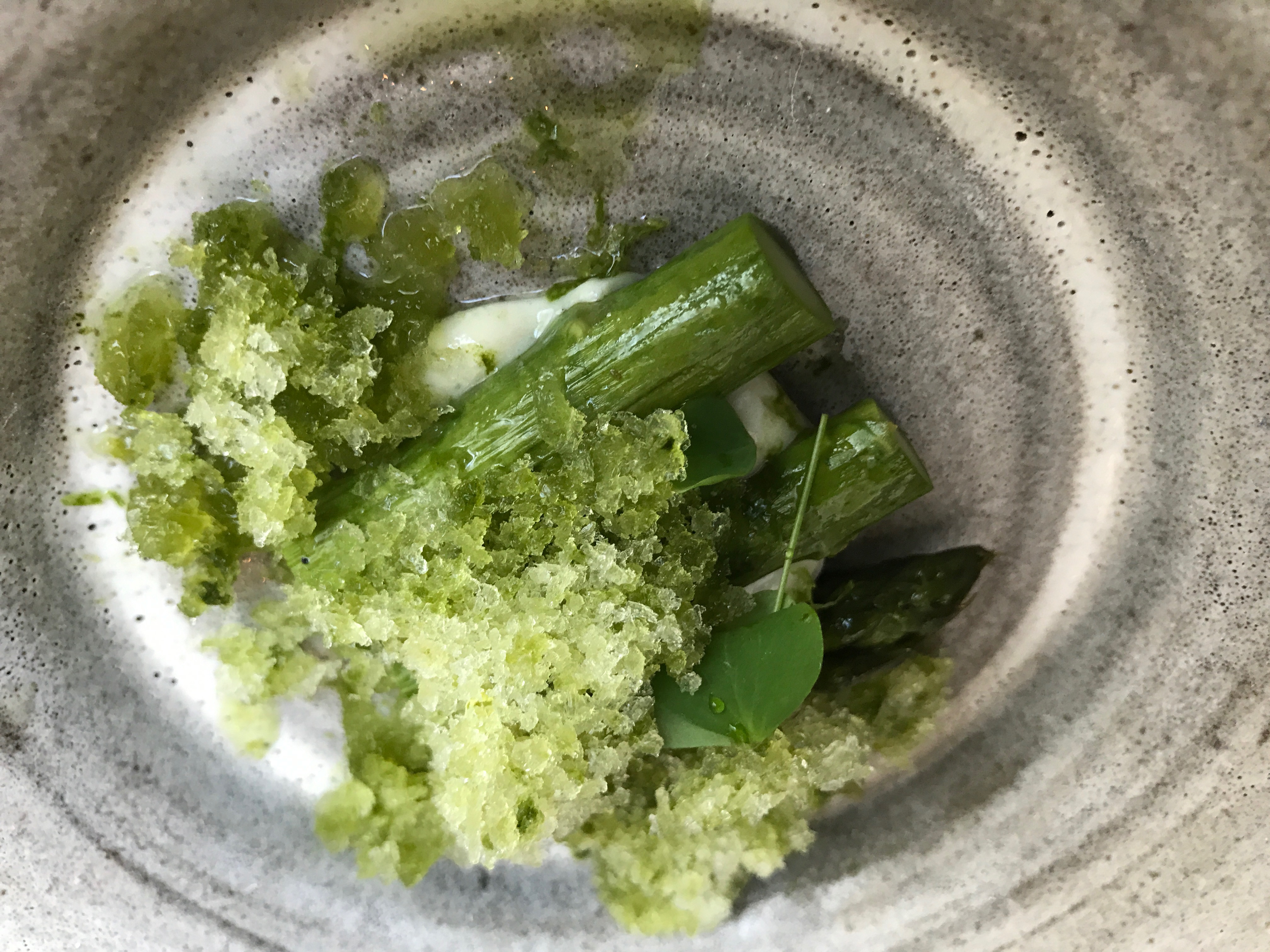 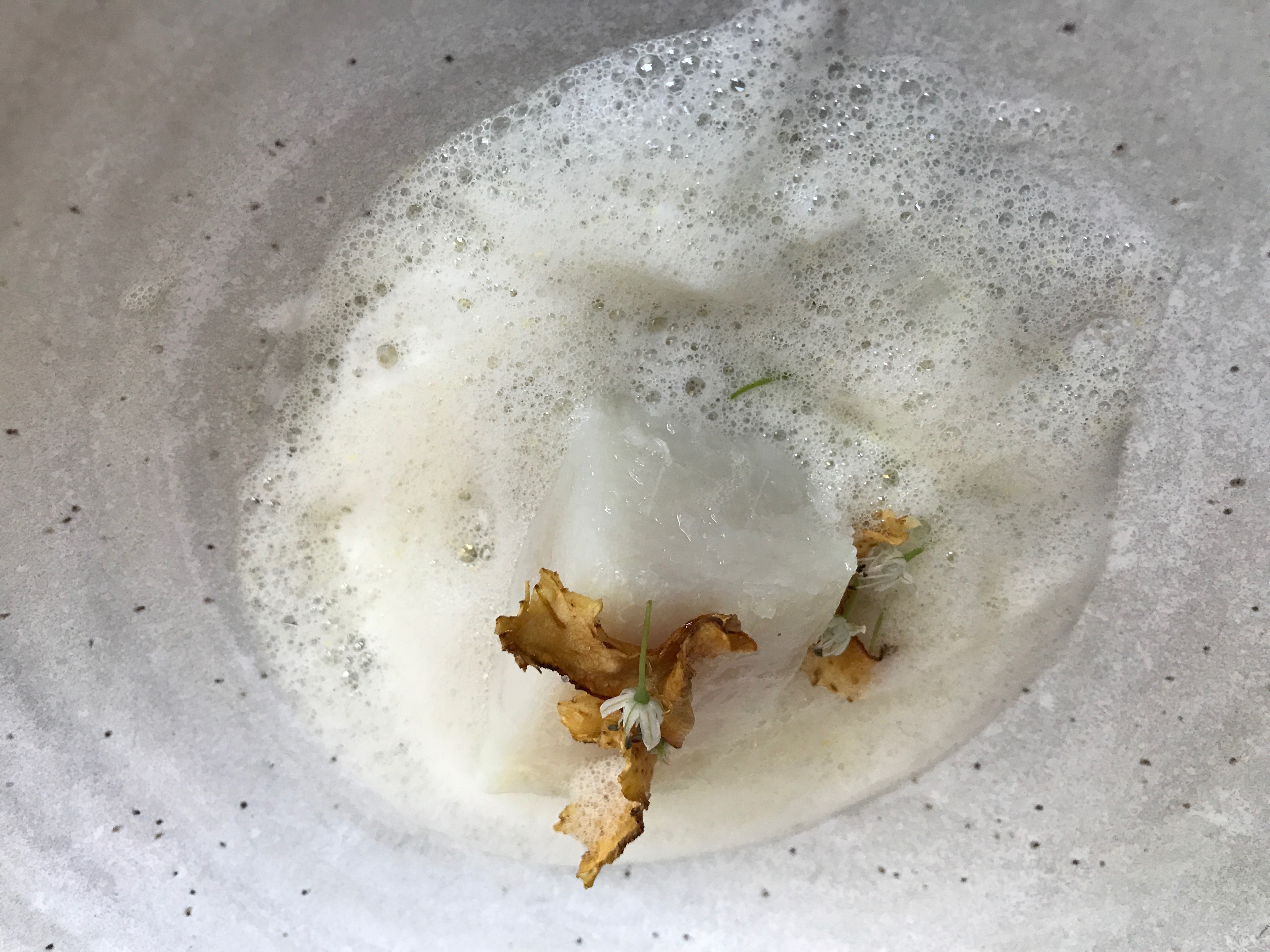 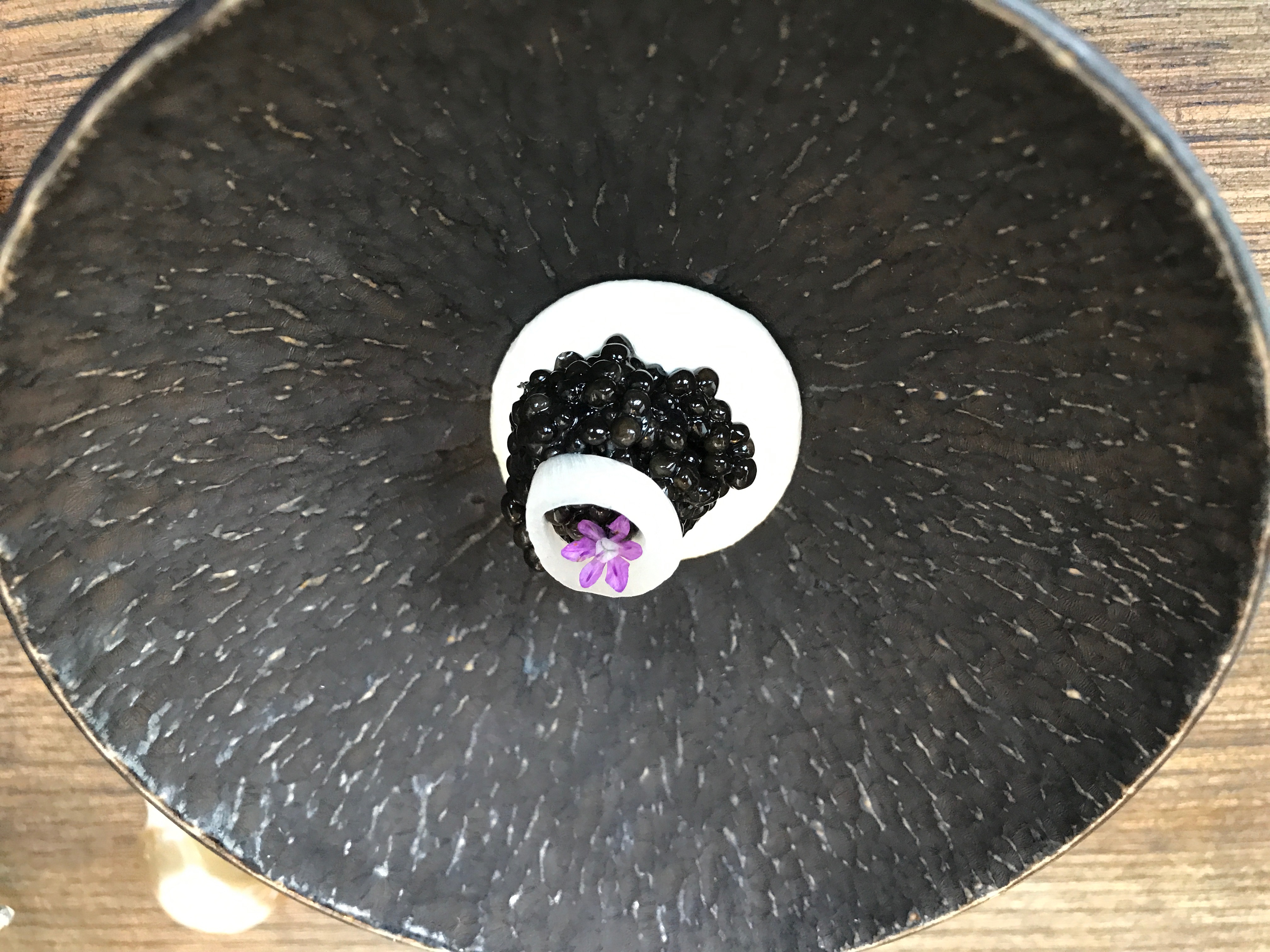 The menu is inventive and includes uncommon ingredients used in uncommon ways. Once seated, diners have to put their fate in the chefs’ hands. You don’t get a printed menu (you do get one with the bill). You learn what you’ll have next when the server brings and describes each dish.  This may intimidate someone who likes to always be in control or isn’t adventurous about food.  In fact, you do have some choice—first, when you decide to dine there, and when you inform the restaurant about diet restrictions at the time you reserve a place.

At one dinner, chefs prepare cod as a confit (simmered in virgin olive oil). As you eat it, something saltier comes after the milder taste of the tender moist cod.  Your plate reveals this black sauce underneath, just enough of it to complement the taste of the fish and please the eye with contrasting colors.  Very yin-yang!  The chef is a master at layering flavors.

I love to eat and consider myself a fairly  adventurous cook so I ask what went into the black sauce.  Black garlic and squid ink!  I’m no stranger to squid ink and have had it in many dishes including a  yummy spaghetti in ink sauce at a bar in Venice.  Served in a small enough amount to tease your palate as well as your prejudices about food, you may wonder why you ever shuddered at the mere thought of eating squid ink.

The whole dinner unfolds in the manner of a full course French menu, You get small servings of amuse bouche, fish and meat courses, palate cleansers and dessert.  Each dish is a symphony of flavors, textures, and colors, with unexpected twists and ingredients.  For instance, a very light bay leaf mousse spooned over a mélange of variously textured citruses. Or tiny slices of sweet tart red beets on top of melting cauliflower puree. Or a sweet oyster shrouded in sea foam and contrasted with tiny slices of crunchy potatoes. Baby shrimp is fragrant with pea tendrils, chrysanthemum, and rhubarb. All dishes are created from a belief in cooking as high art.

My biggest surprise of that evening’s dinner has a “gotcha” twist to it because of an ingredient you find in some Chinese restaurants.  The meat course of roasted heritage chicken breast has tiny slices of black trumpet mushrooms on top.  Underneath the two small pieces of breast is something with a different texture and intenser flavor.  Not easily noticeable since it offers no  contrast in color.

All I can think of as I take a bite is that it’s delicious, and its flavor evolves to its fullness as you chew.  I think, at first, from its taste and texture, that it’s oyster mushroom which I use at home.  But the server says it’s, in fact, duck’s tongue.  Again, I’m no stranger to tongue. I have eaten pastel de lengua, a sort of meat pie in which beef tongue is the main ingredient.

I’m askance at the idea of duck’s tongue.  How many ducks would it take to fill a spoonful?  A beef’s tongue could feed several but it seems decadent to kill many ducks for one bite.  This sounds crazy, of course, but our food prejudices are often that way.

I thoroughly enjoy the one or two pieces of duck’s tongue that the chef snuck under the chicken breast. But I am not about to go to a Chinese restaurant and order a plate of it.  My prejudice does  endure.  But a couple blended creatively and deliciously as Maître Chef James does—awesome!

Babette has been reincarnated at Commis, where chefs treat cooking as high art. It’s the only restaurant in the area with two Michelin stars.  Maître Chef James  and his staff love what they do. Like all gifted artists passionate about their medium, they push cooking as high as they can take it.

My experience at this restaurant has inspired my latest novel, which is women’s fiction tentatively titled Sugar and Spice and All Those Lies.