I realized I’m an adventurous foodie when someone asked me these questions.

Any favorite ethnic foods (including French and Italian?) Why?

Having been exposed to many cultures, my tastes are eclectic so I will try most things (see this article, for example) and eat a dish if it tastes good. But only if it doesn’t have insects (except when I was induced to try chili grasshoppers in Oaxaca), snakes, or anything bizarre. I guess I am an adventurous foodie

I love shellfish—crabs, oysters, scallops, shrimps —and will choose it over meat anytime. Bouillabaisse, for me, is tops. I also like sushi especially Hamachi nigiri or rolls, Chinese dimsum dishes with scallop or shrimp and, of course, paella. I go for any cuisine that prepares seafood very well—the best being Japanese, French, Chinese, and Italian. A lot of other cuisines seem to overcook seafood. 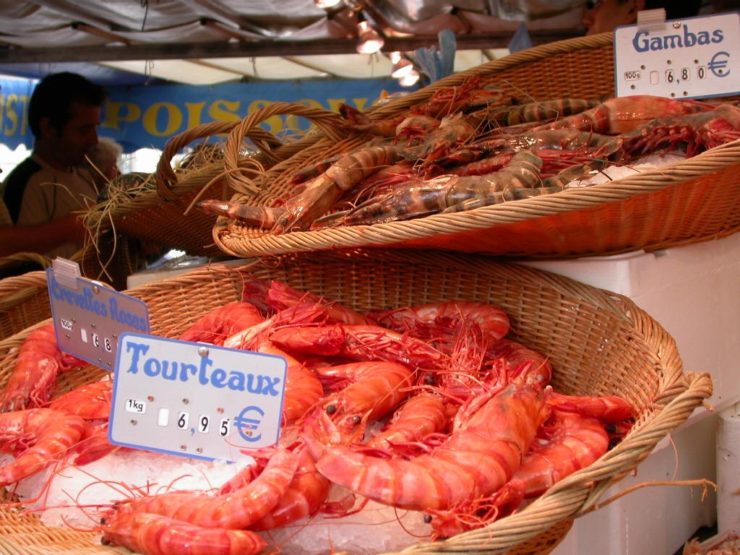 I think the French make the best cheeses. Maybe it has something to do with their reverence for terroir. They also make the best pastries. It probably helps that they have standards for how things are prepared (for instance, all-butter croissants vs. croissants made with both butter and shortening). A visit to almost any French patisserie tempts you with beautiful, scrumptious desserts but macarons are my favorite. 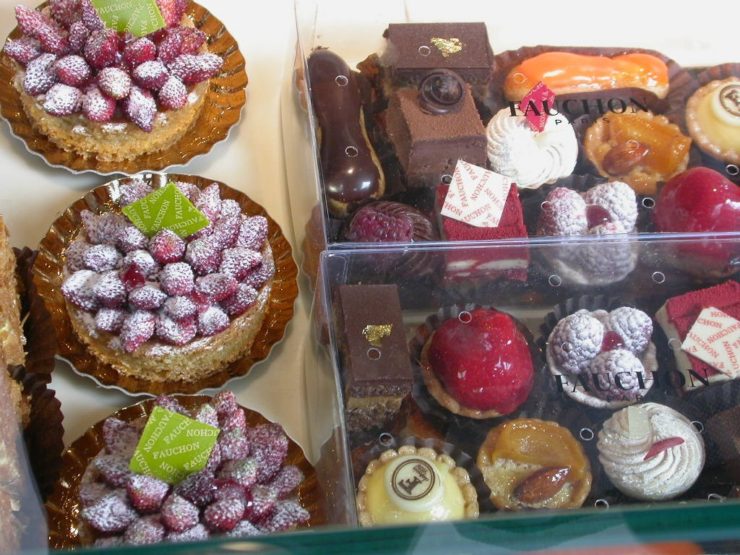 When in Paris, we feast on what we can get at neighborhood food sellers, open markets or the occasional trip to the vast food sections of les grands magasins (big upscale department stores). Here’s a great everyday meal: freshly-baked warm baguette a la tradition, beurre fumé (smoked butter) from La Grande Épicerie in Le Bon Marché, cheese from a nearby fromagerie, and some quickly-sautéed veggies. 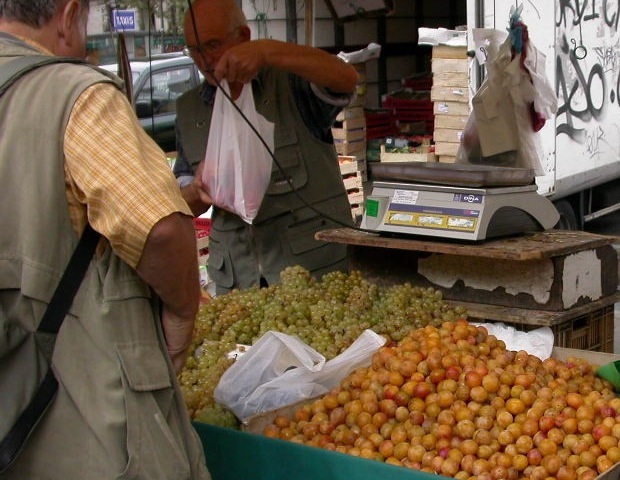 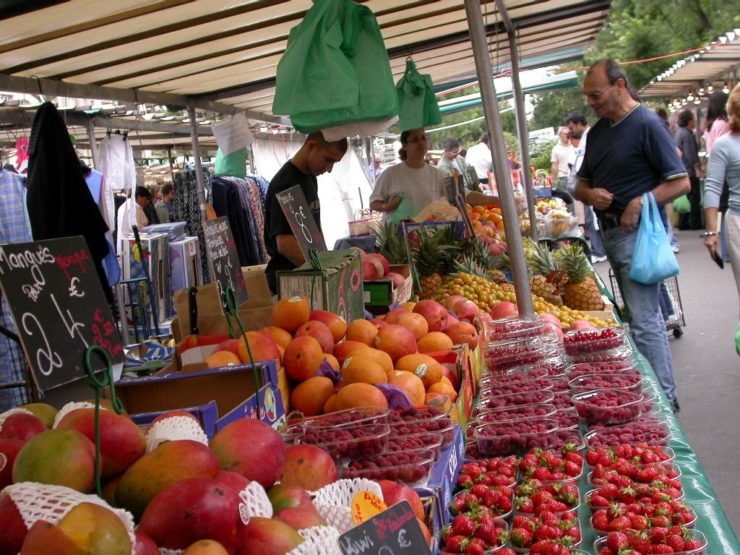 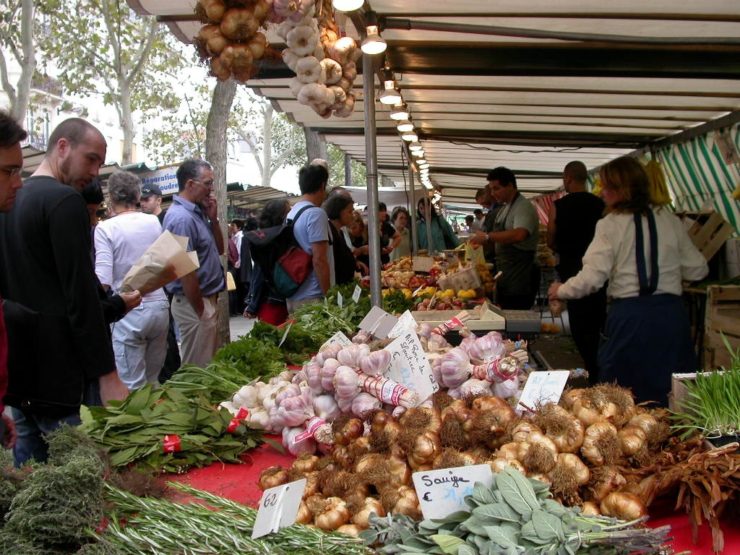 Le Bon Marché claims to be the world’s first department store. With the recent opening of La Grande Épicerie Rive Droite in the affluent 16th arrondissement, it can claim to have the largest food mecca in Paris, besting those at the Galeries Lafayette and Printemps. For more adventurous eating in Paris, see: Adventurous Foodie: A Simple Plate of Chanterelles.

Do you ever cook any of the foods mentioned in your books?

Yes, I made the chanterelles dish in Sugar and Spice and All Those Lies without using a recipe. Also gougère and fig tart, but with recipes.

When I include a dish in a book, it’s something I’m familiar with, either from having eaten it or cooked it. I make ratatouille a lot, Moroccan tagine a sometimes, and tried tandoori lamb once—all dishes from Hello, My Love. Traditionally, tagine is cooked in a vessel of the same name, which I don’t have, but it’s easy to approximate in a pot with a heavy lid. It’s harder to make authentic tandoori lamb without the tandoor oven because home ovens can’t reach the high heat in a tandoor.

I make mushroom soup often, beet soup and stuffed cabbage leaves occasionally. I haven’t made bigos, (dishes from Hello, Agnieszka) but I imagine it’s much like doing any meat stew with vegetables (bigos has sauerkraut). Same thing with pierogis, which are like Chinese or Japanese dumplings, except for the fillings. I can use wonton skins for those.

Asian dishes are standard at home because stir fries are easy and quick, and you can leave stews to braise awhile. Leilani’s mother prepares dishes like these in Welcome Reluctant Stranger. And, of course, I’ve made flan.

From my first book, Margaret of the North, the Victorian-era characters have berries and cream. This is the easiest desert you could make. Add a soupçon or more of Grand Marnier (an orange liqueur) on the berries and/or the whipped cream. You don’t need the liqueur, but that little bit takes the dish up to heavenly. The ingredients make it most special.

What are your top two favorite restaurants you ate at? Dishes you loved at those restaurants?

We’re lucky to live in the SF Bay Area where you can great food. When we want something truly special, we go to Commis, the only Michelin-starred (??) restaurant in our area. The chef is extremely inventive and offers just one menu every night. He makes dining a memorable experience. I can’t do justice in one sentence to what he does but here’s a blogpost quote: Each dish is a symphony of flavors, textures, and colors, with unexpected twists and ingredients.

When you have a chef like that, you can’t say one thing or another is your favorite. You keep yourself open to what he offers. Eating here informs many scenes in Sugar and Spice and All Those Lies.

When we celebrate with family, our go-to favorite is the Japanese Izakaya Kiraku which is like a Japanese-style dimsum. The menu changes often and dishes offered go well with sake.