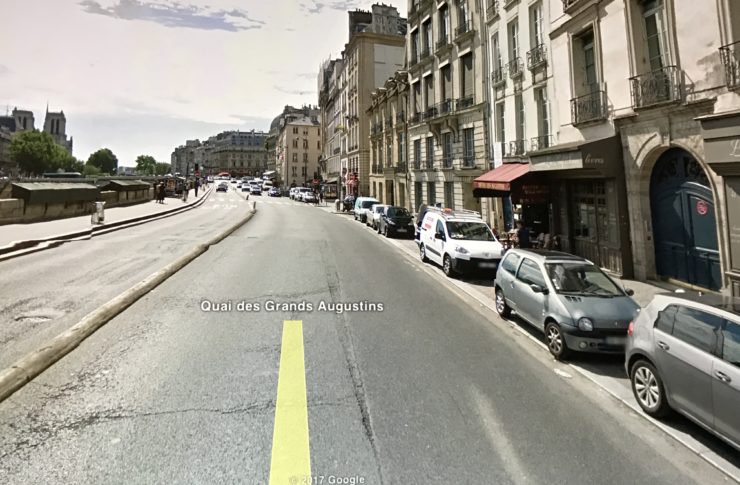 Quai des Grands Augustins teems with people on this cool but sunny May day in 2004. Often, you can’t get to the end of this Quai without bumping shoulders with other giddy tourists. This stretch on the left bank has some of the most popular sites in Paris: Notre Dame Cathedral, Sainte Chapelle, Pont Neuf, the fountain of Saint Michel, to name a few.

Ten paces away from the courtyard door of the apartment building where we’ve booked a six-month stay, Rich stops. He nudges my arm and whispers, “Isn’t that Francis Ford Coppola?” As in “the Coppola” of the Godfather movies and Apocalypse Now. 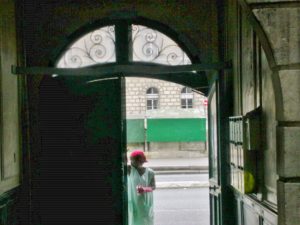 A few feet in front of me, a man dressed in a dapper light brown summer linen suit, a matching hat, and sunglasses, sits quietly at a Paris café smoking a cigar. He’s nursing a glass of red wine, and indulging in a favorite Parisian pastime—watching people and the world go by from his little perch in a café. He is alone and his is the only table on the sidewalk today so the café must have especially set it out for him.

I look skeptically at Rich. Like me, he has been primed to anticipate seeing Monsieur Coppola by the owner of this bistro/café so I wonder if he’s just seeing things because he seriously would love to see Coppola.

The lady owner who has raised our anticipation is the first Parisian we talked to during this visit. On a lazy afternoon when we arrived a month ago, she sat at a table outside this café. She looked so laid-back and content that we surmised she was from the neighborhood. We smiled, she smiled back and said, “Bon Jour!”

Her name is Kathy and she and Loulou, another lady, own this bistro/café next to our apartment building. Both are petite, energetic, friendly, and approaching middle age. The place is homey, not fancy, small—with a few tables on the sidewalk on nice days—and somewhat dark and smoky inside. It’s a typical neighborhood Paris café before the French banned smoking in public spaces. We’ve taken tea there but we cannot stay too long. 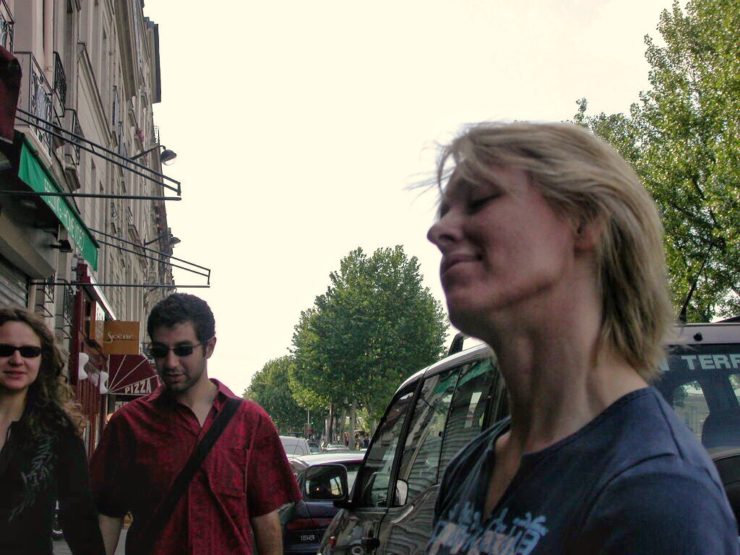 Kathy and Loulou serve and probably cook, too. Sometimes we pass them by, sweeping the sidewalk. So we wave a greeting, smile, and, occasionally, we chat. Kathy speaks some English and we speak some French and, somehow, it all works out. She teaches me a little more French, I teach her a little more English.

One day, Kathy tells us that Francis Ford Coppola is a regular client when he’s in Paris. He has a penthouse overlooking the Seine on the upper floor of an adjacent building. She’s quite thrilled to tell us all this, as if having Coppola as client bestows some magic on their Paris café.

But how likely is it that he’ll be in Paris at the same time that we are? He’s not here now, Kathy informs us sadly. But she hopes.

We have, in fact, seen him on French television, escorting his daughter at the Cannes Film Festival that year. So, quite possibly, he will come to Paris.

Kathy’s hope has come to pass. This May afternoon, a couple of weeks after we talked to her, it seems Monsieur Coppola is finally here.

Rich repeats his question. I don’t answer. Instead, as if drawn by something I can’t resist, I approach Monsieur Coppola’s table, smile at him, and say, “My husband says you’re Francis Ford Coppola.”

He nods with a small, reluctant smile (smiles go a long way). He still has the full beard we remember from his Godfather days but it’s now all white. Polite in that guarded celebrity way, he doesn’t encourage much interaction, but doesn’t shrink from it, either.

Hero-worship shining in my eyes, I say, “I think you’re the best director America has seen in a while. I love your movies, especially Apocalypse Now.”

Not original, but what else can I have said? I’m not, at that moment, totally in control of the words coming out of my mouth. Rich, who’s now standing next to me, says something equally inane. We bumble through with small talk about being his neighbors and how we think he is America’s greatest living director. He smiles patiently, mumbles something nice and inconsequential. Maybe, he has heard such praise too often and it has lost its impact. After a few more inane remarks, we realize we must leave him in peace so he can enjoy pretending he’s like everyone else who visits Paris.

“Well,” Rich and I say to each other as we walk away, feeling both excited and silly, “can you imagine sharing a favorite Paris café with Mr. Coppola?”

What is it about our fascination with celebrities? In our case, we turn into inarticulate idiots in front of greatness. We do believe this movie director is the finest American filmmaker since Orson Welles. (We’re movie buffs, by the way. We watch a movie a night).

We see Coppola inside the café a couple more times, having lunch with a group. Kathy tells us his son and his daughter Sofia—then, a budding movie director—have arrived to join him. 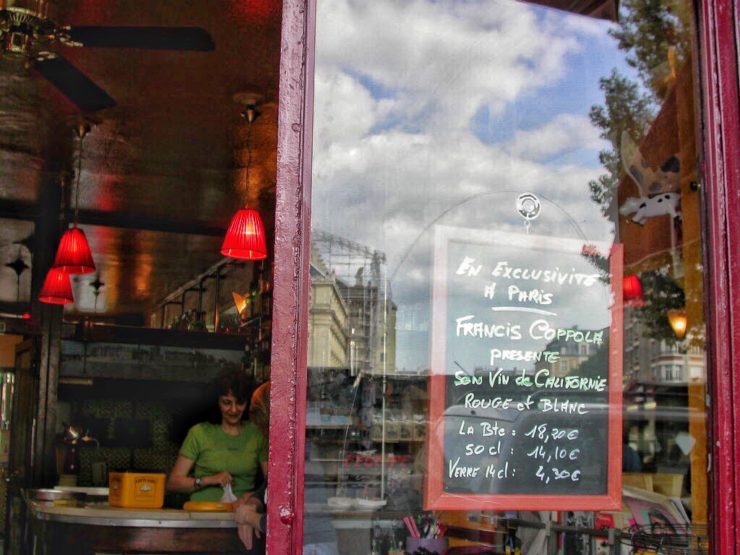 She also boasts about her Paris café scoring a first: the only place in all of France where one can get the wines of Niebaum-Coppola of Napa Valley. Just outside the entrance, we pause to look at her chalkboard menu and sure enough, there it is—“Exclusively, in Paris, Francis Coppola presents California wines.”

Crossing paths with celebrities is not unusual in a place like Paris. More recently, we entered a bakery followed by a top French actor (Daniel Auteuil) and his family. We’ve spotted Johnny Depp in an upscale department store. Decades ago, when Rich was a student on summer vacation, he met an assistant director who worked with François Truffaut to produce 400 Blows, a classic genre-defining Nouvelle Vague film. From the Paris café where they met, the assistant director and the young woman with him took Rich to several spots they often haunt in Paris.

Rich’s recounting of that experience intrigued me so much that I decided to “appropriate” it for one of the short stories in Brief Encounters with Solitary Souls. Artistic appropriation is an old technique; most famous instance: Andy Warhol and his Campbell soup cans. As you might expect, the title of that story is At A Paris Café. Download the short story here.

This isn’t my first time, appropriating real events for scenes in my stories. Something that either happened to me or that I witnessed inspired each of the five stories in Brief Encounters. The Torres family flight from their native country in the Prologue of Welcome Reluctant Stranger is essentially retelling the experience of people I know. Now, I’m looking for a way to inject that little encounter with Monsieur Coppola in a story I’m writing. 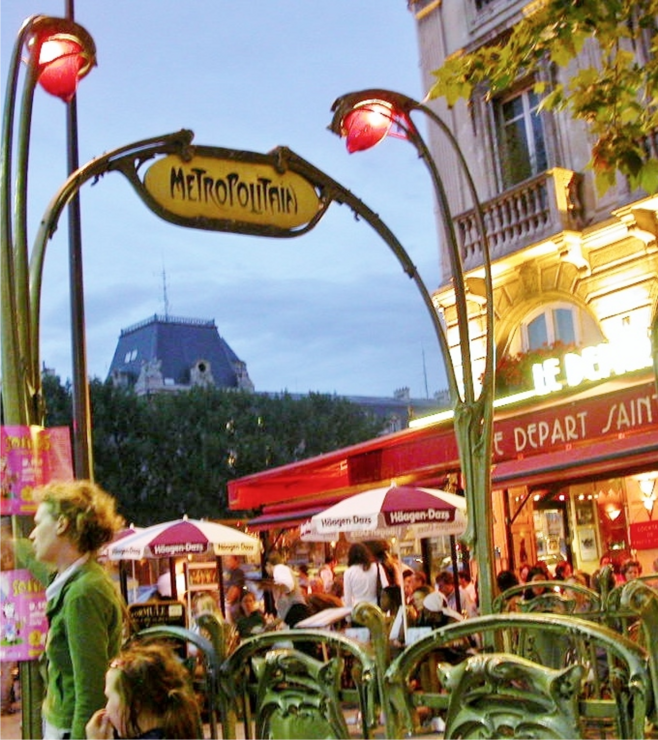