Do you have trouble throwing stuff? Those that you might have treasured in the past but are no longer of current importance to you.

Not too long ago, I rummaged through a couple of old boxes to make room for a new box on a large industrial shelf in the garage. Boxes that gathered dust for at least 15 years, that I left there without much thought when we moved to this house.

Mostly, the old garaged boxes contained loose sheets of wide and holey mainframe-computer paper. On the back of these sheets I had hurriedly scribbled my reactions to certain events. Events that happened to me. That made me angry, sad or unusually happy.

Underneath these sheets, lay a tiny notebook. One I assumed I had lost in the moves I’ve made from one house to another, from one state to another. I had half-filled the notebook with my musings about life, lyrics of a couple of songs, and passages from poetry that spoke to me. All written or collected when I was a teenager.

A few weeks later, seeking inspiration for a new novel, I thought: Why not an epistolary novel?

What is an epistolary novel? If you’re a Jane Austen fan and have read Lady Susan, you’d be familiar with it. It’s a narrative device that authors seldom use nowadays. In the the past, it consisted of letters, like in Lady Susan, that Ms. Austen wrote in her juvenile years. Now it can use journals or—in our tech-driven society—emails or text messages.

The Guernsey Literary and Potato Peel Pie Society is a contemporary example of an epistolary novel. The authors, Mary Ann Shaffer and Annie Barrows, wrote it as an exchange of letters and published it in 2008. A team of filmmakers from the US, the UK and France turned it into a film ten years later. I read the book as part of my research into this literary form while writing The Shade Under the Mango Tree. I also watched the 2018 film (on Netflix) based, not too faithfully, on the book. 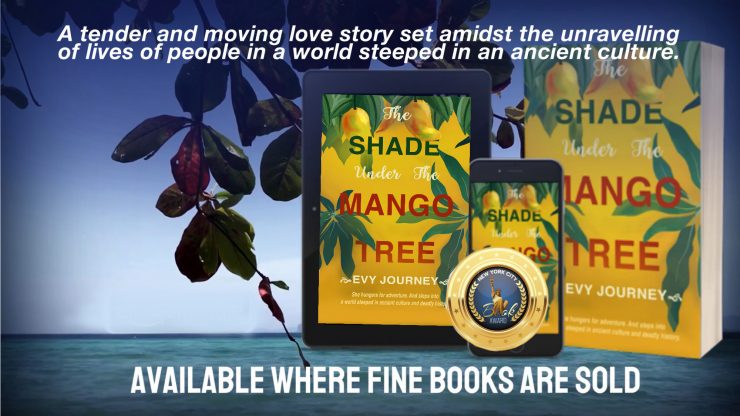 Some snippets from the nearly-forgotten writings in that tiny notebook found their way into my novel. For instance, the heroine’s Grandma didn’t wear perfume but tucked fragrant flowers into her bun. My grandmother did that. The heroine, in her teenage years, wondered why she was here on earth. I obsessed about existential questions when I was seventeen. The poetry quoted in the book were directly lifted from the collection in the notebook.

The healing potential of writing is a theme woven into my novel. From the journal that the heroine started when she was fifteen to the memoir she intends to work on to help make sense of what she went through.