Pandemic life is strange. We’re forced to live even more in a virtual world.

I watch as my niece’s two little girls argue over who gets to use the iPad first. Their mother has ruled that each only gets thirty minutes to watch or do what they want on it. And only after they’ve done their pandemic, home-supervised “schoolwork.” She doesn’t want them to spend hours staring at screens. During the minutes they have control of it, they lose track of time and become oblivious (deaf and blind) to what’s happening around them. Their absorption in their virtual world is complete.

The older sister wins the argument and takes control of the iPad. The younger one sits next to her. She will get her thirty minutes soon enough. In the meantime, she may not be holding the tablet and chosen what to do but the screen still claims her full attention. 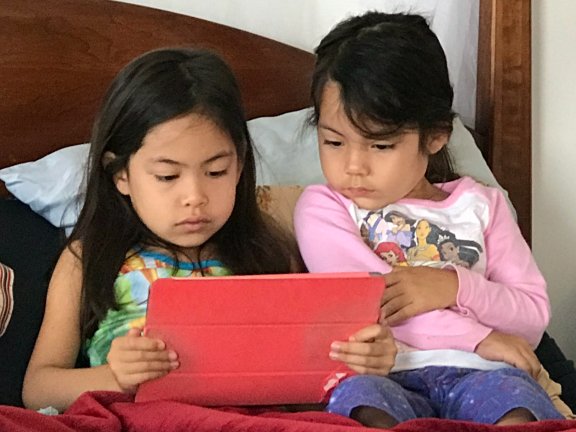 Half an hour later, they switch. Same scenario. But now, it’s the older sister’s turn to endure her sister’s choice.

Those gadgets are unarguably useful and entertaining. But isn’t there something crazy, even unnatural about how they rule our lives?

Imagine it: Your eyes glued to that screen—doesn’t matter what size. It informs you, teaches you, entertains you. You read from it, talk to it, play and do work in it, maybe even make love to it. The only role or desire it won’t satisfy is one your body needs for survival. Sure, you can salivate looking at a dish of ice cream on the screen. You might even lick it. But you still have to trudge to the refrigerator to fill that void in your gut. And whether you sleep at your desk in front of a screen or lie in bed, you must cut off your connection with it.

We depend on these gadgets for psychosocial sustenance. Rely on text messages and notifications they deliver to dictate what we do next. Tempt disaster crossing busy streets to check our ringing mobiles. And that was before the current pandemic and the protests against racism.

I grew up in a reality devoid of electronic handhelds that zoom across cyberspace in nanoseconds To and from anywhere in the world. For so many things we need or want.

I grew up with mainframe computers housed in large containers that could hog space in a room. To extract information out of them, you had to punch cards fed into readers several times the size of a desktop. We used these mainframes only for storage and to perform statistical analysis.

By the time I had a regular job after grad school, much had already changed. Information we needed was at the tips of fingers poised on top of a desktop keyboard. The large system computer was still there, but only for data storage because desktops didn’t yet have much local memory. Of course, that changed too. In no time at all.

At the turn of the century, my office was the laptop I carried around. I talked to my project staff and we sent files back and forth via email. We met face-to-face only at the beginning and towards the end of projects. Or when we met with clients who provided funding and were the primary consumers of project results.

Now, in pandemic isolation, it feels like a virtual life is the only one I have. The only one I can look forward to. Rich has passed on and, though I have friends and relatives within reach, I can only engage with them on Facetime or via text messages.

To today’s youth, introduced into a virtual world maybe before they have a full set of teeth, that world may not feel as surreal as it does to me.

Will a time come when we forget what people are like in real life? When we exist as avatars in a world where everything about being human has been AI-simulated?

Curious about my latest novel?