A large income is the best recipe for happiness I ever heard of.

So says Jane Austen—like her heroines, the ever sensible woman.

She probably did believe that. Which is why her heroes are often rich either by inheritance (Darcy, Knightley) or by acquiring wealth through military victories (Captain Wentworth, Colonel Brandon). But for her, that belief was tempered by reality, her wit, and her sense of the ridiculous.

Mr. Darcy creates a buzz among the ladies in Hertfordshire because of his large income (£10,000.00 a year), an amount that may well translate to about £10,000,000.00 or $14M in today’s currency. And that is only his income—money he plays with each year—not his net value.

With his economic worth, he overshadows the agreeable Mr. Bingley whose legacy makes half as much. At least until the ladies realize Mr. Darcy is a snob. At that point, his money doesn’t redeem him.

Wealth was important to Regency women, but not necessary to Austen’s heroines. In Persuasion, at the advice of an older, presumably wiser woman, Anne Eliot gives up the man she loves because he has neither illustrious name nor large fortune, a decision she regrets.

Times have not changed. Scan the romance novels on Amazon. Among bestsellers, alongside military men (also seen in Austen) and cowboys (an American thing) are billionaire heroes who, because of money, can afford to be bad boys.

Ah, Jane, I hope you’re smiling in heaven and not turning in your grave for the legacy you have left our romantic scribes.

Still, there is a difference, maybe a big one. Jane Austen writes about the manners and values of her time, society and culture. She is a realist gently parodying the life of her time. She leaves no one unscathed — her most heroic hero, Darcy, is proud; her strongest heroine, Eliza Bennett, prejudiced, blinding her to her own feelings. They overcome these shortcomings, of course. Today, many romance novels are essentially fantasies, fairy tale lives we can only dream of in a more complex, uncertain world.

Money is important, but many of us listen to (Peanuts) Lucy’s advice: 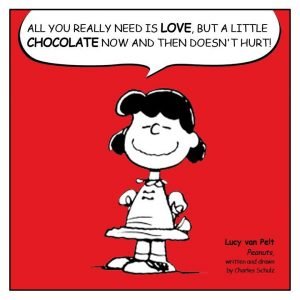 You eat these—can’t wear them.