Has anyone who’s lived within at least two cultures not been tempted to weigh in on the broiling issue of being “transracial”?

Rachel Dolezal, former regional president of the NAACP, claimed she was black, but was recently outed as white by her own family. She tried to defend her claim by saying she was “transracial”—across or crossing racial boundaries, as internet dictionaries define it. 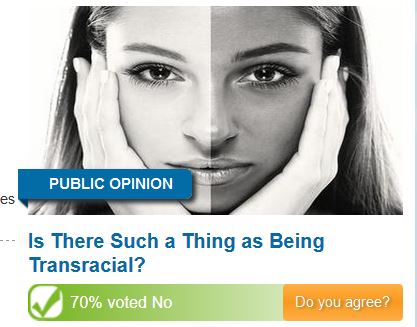 This concept must have easily suggested itself to many, including Ms. Dolezal, because of the recent juicy hullaballoo over transgender Bruce/Caitlyn Jenner. But, of course, many more people disputed the comparison, citing some biological evidence for sexual identification. No such basis exists for race. How can you, biologically go from being white to being black? Getting a tan or frizzing and dyeing your hair won’t do it.

While some doubt that transracial is real, there are people who do consider themselves “transracial”—mostly those of a certain race adopted by parents of another race. But even that use of the term may not be accurate.

Race vs. Culture. Is the concept, “transracial,” even real? For, in fact, you can never cross “racial boundaries” no matter how hard you try via superficial means (Ms. Dolezal’s case is a sad example of that). What are transferred, acquired, crossed, or changed, really, are things like attitudes, tastes, values, ways of behaving—all attributes of culture.

So, why not “transcultural”? Or better yet, multicultural? Transcultural can imply complete crossing from one culture to another; multicultural an embracing of, and adapting to, several cultures.

Transcultural vs. Multicultural. Is there a difference between these terms? Yes. Scholars do try to make distinctions and they’ve even added “intercultural” into the mix. In any case, all of them deal with the fact that, with the greater ease in migration, most of the world, especially the big cities, is now exposed to more than one culture. The idea of transcultural approaches, for instance, is big in nursing care.

While you live in that melting-pot milieu, you cannot totally insulate yourself from the changes that immigrant cultures bring. You may first be aware of them in new faces you see at your children’s school or at supermarkets, in exotic restaurants sprouting in your area, at a medical clinic or hospital among the nurses and doctors, or in some good or bad news item about someone in the immigrant group.

So, how do you, the invaded society, adjust? However you do it, your initial reactions are bound to be unpleasant. The new and the different can be anxiety-provoking, even threatening. But, in the end, when the plurality of your human environment becomes real for you, it’s you who chooses how you take it.

For me, at least, being multicultural is socially enriching and mind expanding. And I’ve mined it in my writing, particularly Welcome Reluctant Stranger. You’ll also find multicultural references in Hello, Agnieszka and Hello, My Love.